As a wand girl I always have the same issues. Wands aren’t portable and they are huge and heavy.

I had been working at the sex shop for a year and a month eyeing the WeVibe Tango daily. Anyone who wanted an extremely strong clitoral toy was immediately shown the Tango. I envied as guest after guest left the store. I joked that they could charge it in the car.

I get a 50% discount on everything I could get at my work, except for We-Vibe and Lelo products. I wanted the tango but I was working hard to pay my bills. I only for full time hours in August and had car repairs to pay for. Sometimes I buy things online instead of instore, this was certainly my plan for the Tango.

On Black Friday I found a good deal on the Tango from a Canadian site with free shipping. I put it in my cart, went to pay, and my paypal wasn’t working. Cruel travesty!  It seemed the Gods had denied me nirvana. I would forever settle for bulky toys and the bedroom.

I continued my weekend, slightly glad I was $90 dollars richer than I would have been. I figured I had missed the sale and began shiva for my dreams. On Monday I was resting thinking about my day off and what I would do and looking through my emails. I remembered that Cyber Monday was another great sales day and maybe, just maybe, the Tango would be on sale and my Paypal would work.

I went to the site, and the deal was still on. I was so happy! After my first attempt on Cyber Friday not working, I wasn’t certain it would work, I put some Sliquid Satin in my cart and proceeded to checkout. As I connected to Paypal I shut my eyes. Peaking through my fingers I saw the words: “Confirmation Number:”

I noticed later on that I had forgotten to press the option for one day shipping. I tracked my order as it came from a town 7 hours away and wished I could have driven to get it. On the next Monday I got the notification that read: “Out for Delivery” It was as if the sun was beating down on me, the wind rushed through my hair, I could barely make out the chirps of the birds as they said: “Go fuck yourself”.

Returning home (I broke the speed limit to get there), I ran to the mailbox, grabbed my delivery card and there it said “Will be available tomorrow for pick up at 13:30”. I am no quitter, knowing the post office didnt close for another 20 minutes I hopped into the car and raced off to see if the person behind the cash would do me a favour and hand me it early. I walked up pretending I didnt have the delivery card said “I think there’s a package here for me” she got my name and handed me my box. I could hardly restrain my hands from opening it. Knowing I would later review the product I had to take a photo of the shipment first.

I took both my Sliquid and Tango out of the box and placed them into my backpack. As I walked into the house I placed my dinner into the  microwave and put my tango on charge. I took a photo of the box, and went to the We-Vibe website to register my warranty. This process took 2 minutes maximum.

After waiting days to have it ship and then hours for it to get to my house in the deep snow, I was more than prepared for the powerful Tango. Like a virgin male hiring a prostitute, I basically lost my cookies when the vibration turned on.

I started it on the first setting, Even this setting was rumbly and had deep intensity. Slowly I brought the setting up. I need strong intensity toys for self stimulation.

The Tango has been the most amazing clitoral toy I have ever owned. It is small enough that I can wear it outside the house. I sometimes bring it with me for car quickies or a fast one on my break.

I brought it with me to a swingers club and it stimulated me while sitting in my underwear without any touching on my part. I have used it by holding it in my palm while letting the vibration transfer through my hand.
My friend lost hers and refused to believe it was gone. We both agree that it is an amazing toy and perfect for anyone who needs strong clitoral stimulation. (Update: she found it 2 months later)

More about the Tango:

Where to get it:
LoveHoney 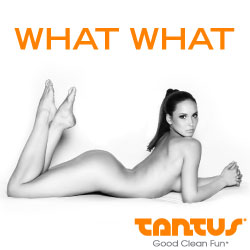